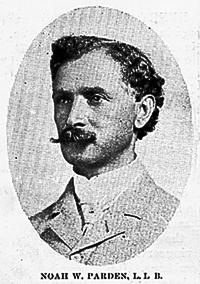 Although Noah Parden was orphaned and consigned to an orphanage by the age of seven, he would go on to become the first African American Lawyer to argue and win a “Stay of Execution” from the United States Supreme Court.

Noah was born in Floyd County Georgia in 1865, and was raised in an orphanage after both parents died. He came to Chattanooga at 19 and entered Howard High School.

While attending classes, he worked days in a tobacco field and nights in a factory to save money for law school. After graduation, he entered Central Tennessee College of Nashville’s Law Department, and graduated at the head of his class.

He returned to Chattanooga, set up his practice, and was admitted to practice law in all courts in Tennessee, including the state Supreme Court.

Noah was so good at his profession, Chattanooga’s legal and civilian community referred to him as “trouble maker and community agitator.” He was one who fought vigorously for his clients, kneeled down on his knees and prayed to God in front of court spectators without shame or reservation, and cried with families when he lost a case…which wasn’t often.

He was one of the earliest lawyers on record to make use of the “contingency” method of collecting fees for representation, doing so because most of his clients were too poor to pay and could only offer a hot meal as compensation.

One of Noah’s toughest cases was the Ed Johnson case. Ed was a young African American accused of raping a white woman in Chattanooga in 1906. When he was convicted and sentenced to die, Noah and a colleague (attorney Styles Hutchins) filed an appeal with the U.S. Supreme Court for a stay of execution, and it was granted!

This was a historic moment, because never before had an African American ever been allowed to argue anything before the Supreme Court Justices.

One of the Justices even designated Noah as lead counsel, but he would never enjoy the privilege. His client, Ed Johnson, was lynched before he could assume that role.

The life of Noah Parden and this life-altering case is too complex to feature in this post. Here are excellent references for further reading:

Contempt of Court, by Mark Curriden

African Americans of Chattanooga: A History of Unsung Heroes (see link and book jacket below).