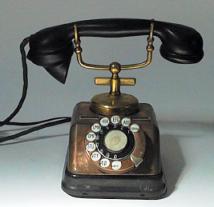 INVENTION:
AUTOMATIC TELEPHONE MESSAGE RECORDER
If you have ever wondered who invented the telephone answering machine, wonder no more! Benjamin F. Thornton was the man!

Benjamin lived in Harrisburg, Pennsylvania in the 1930’s, and he wanted people to be able to receive their telephone messages even during their absence from home or office.

His invention, the telephone message recorder, was fitted with a turntable for a record disc, an electric motor to operate the table, and an electric switch that connected it to the telephone line. This photo is an example of the 1930’s style telephone of Benjamin’s day.

In those days, a person at a central switchboard had to connect the caller to his party, but once that was done, the invention motor kicked in, turning the recording disc, and recording the message. This invention was groundbreaking, to say the very least. 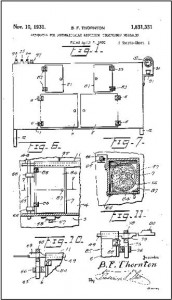 To be certain his new invention remained handy and hassle-free, Benjamin tinkered with ways for the recipient to know the exact times his calls came in. He used a time clock on his invention, adapting it to be operated by the disc-changing mechanism, so that when the motor kick-started the disc-changing mechanism, it stamped the time the message was received on a strip of paper.

Accordingly, every message received was stamped in chronological order, and the recipient knew the exact time each call had been made.

One other handy feature of this early invention was in the presence of another apparatus that allowed the user to record his own original message on the out-going disc. Such a feature was virtually unheard of at the time. Of course, our society now uses these features on a daily basis.

This is an image of Benjamin’s original patent sketch.