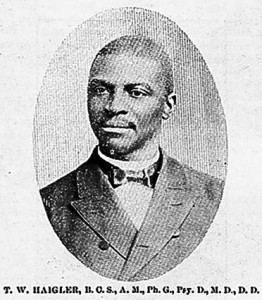 Dr. Thomas William Haigler was a man of extraordinary achievements. Not only was he a physician, a surgeon, a pharmacist and an orator, he was also founder of the Chattanooga National Medical College pictured below, which was known across the US, and where many promising individuals were trained in the field of medicine.

This black-owned business, which opened in 1898, was no small achievement.

Thomas was born in Orangeburg County, South Carolina on July 4, 1847. His father was a farmer and his mother a seamstress, and together, they saw to it that Thomas received an education.

He graduated from Louisville National Medical College with high honors as a doctor of medicine and surgery, and hung his shingle in Chattanooga, Tennessee in 1878. His arrival was a godsend, too, because the yellow fever epidemic had moved into full swing in Chattanooga, and he was sorely needed in the black community. 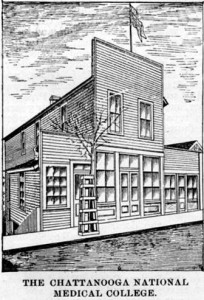 By 1890, he had opened his own drugstore, and on October 3, 1898, he organized the Chattanooga National Medical College.

With such an impressive resume, Dr. Haigler naturally enjoyed a fine reputation. It was often said of him, “There is not a lazy bone in the man.”

His personal motto was “Grit, grace and greenbacks,” which interpreted, meant, “religion for the soul, education for the head, and money for the pocket.”