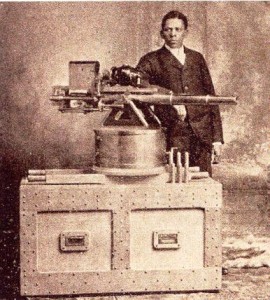 Meet Eugene Burkins, inventor of the “Burkins Automatic Machine-Gun.”
Other than learning to read and write, Eugene never had much education and once worked as a “bootblack,” cleaning and polishing shoes for a living. He had never been a soldier, or even had any experience with guns of any type or description, and it is these facts that make his invention all the more brilliant in nature.

After seeing a picture of the guns on the Battleship Maine in the local newspaper, hestudied the pictures and imagined ways in which he could improve the machine gun and increase its firing capacity.

Eugene made his first working model with a pocket knife. However, word soon spread about his brilliant endeavor and some of the leading African Americans of that period helped him secure his patent. 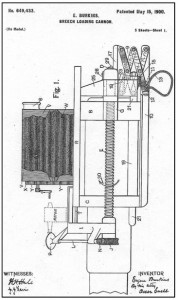 A Mr. Madden, a wealthy Black businessman in Chicago, invested over $3,000 (equivalent to over $62,000 by today’s standards) to make a perfect model of the invention.

The result was a machine gun that fired seven times more bullets a minute than the Gatling gun from the Battleship Maine.

Several foreign countries quickly offered large sums of money for the rights to manufacture Mr. Burkins’ gun for their own naval departments, but Eugene and his partner, Mr. Madden, decided to try to control the manufacturing interest in the United States.

Admiral George Dewey, a famous Naval military figure in American history, was quoted as saying: “Burkins’ Machine Gun was by far the best machine-gun ever made.”

William Still and His Freedom Stories: The Father of the Underground Railroad