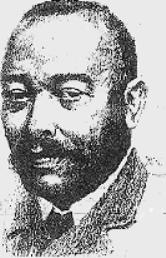 “THE BLACK EDISON”
INVENTION:
Synchronous Multiplex Railway Telegraph
Granville T. Woods was born in Columbus, Ohio on April 23, 1856, and attended school until age 10. After that, he attended night classes so he could apprentice in a machine and blacksmith shop during the day.

He worked many odd jobs, but in his spare time, he studied electronics. Although his odd jobs didn’t get him far, his talents did not go unnoticed, and he eventually invented fifteen appliances for electric railways, including an improved steam boiler furnace.

Granville and his brother organized the Woods Electrical Company of Cincinnati, and sold many of his inventions to the country’s giants, such as American Bell Telephone Company, General Electric, and Westinghouse Air Brake Company. 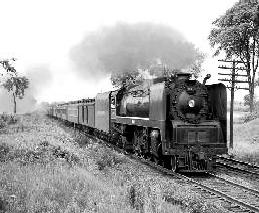 At age 31, Granville invented the Synchronous Multiplex Railway Telegraph, which used the principal of electromagnetic induction to telegraph messages to and from moving trains.

Before Granville’s invention, dispatchers had no way to pinpoint the location of any moving train, and accidents were frequent and deadly. But Granville’s brilliant invention helped avert accidents by keeping each train informed of the other’s whereabouts. Subsequently, train travel became safer and many lives were saved. 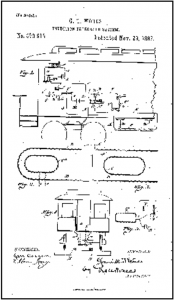 Granville’s invention was so well-received, Thomas Edison sued him for the patent rights, claiming he was the inventor of the Synchronous Multiplex Railway Telegraph. But the United States Patent Office saw through this claim and denied him, twice declaring Granville Woods the original inventor. After this defeat, Edison begged Granville to come to work for him, but since he was a man who loved his independence, Granville turned Edison down.

Some of Granville’s other inventions include the “Telegraphony,” a device that allowed a telegraph station to send voice and telegraph messages over a single wire; the Electric Railway System, which allowed street cars to be propelled by electricity (a feat practically unheard of at that time); an electric incubator (predecessor of today’s large incubators); and an amusement apparatus (predecessor of today’s roller-coaster). In total, Granville T. Woods patented over 60 electrical and mechanical inventions. He died on January 30, 1910 at the age of 54.

What Do You Do With a Chance?