Jack Johnson was born in Galveston, Texas and spent his teenage life working on boats and city docks. He began boxing at age 19, and since he stood 6’1″ and weighed 192 pounds, he quickly instilled fear in his opponents and made a name for himself.

Jack was cocky and confident, and almost always defeated everyone he fought. Of 113 fights, Jack won 79 matches — 44 of them by knockout. One of these wins won him the “colored Heavyweight Championship” on February 3, 1903.

In 1908, Jack defeated Tommy Burns in the 14th round and became the first African american Heavyweight Champion of the World. He held this title until he was knocked out by Jess Willard in the 26th round, on April 1915. 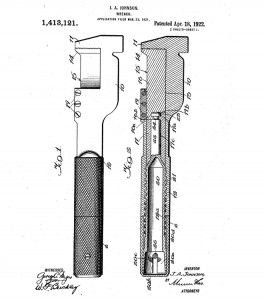 Although Jack was a one-of-a-kind athlete, many people were unmoved by his charms. His World Heavyweight Championship win inspired a quest to find a “great white hope”–a white man who could defeat him and restore the title back to where many whites felt it belonged.

James Jeffries — “the great white hope”–came out of retirement to take the title back from Jack, but he was quickly defeated. This defeat inspired white-on-black violence all over the United States.

The story behind Jack Johnson’s invention is an interesting one, and is often left out of the biographies, documentaries and articles about him. Jack openly broke the hard social rules of his day and dated white women. He was eventually arrested for taking his white girlfriend (who later became his wife) across state lines, and was convicted of this crime and sentenced to a year in Federal prison.

While incarcerated, Jack found the need for a tool that would help him loosen or tighten fastening devices. Since there was no such tool, Jack simply crafted his own, designing it with a powerful gripping action and the ability to be quickly disassembled for replacement or repair.