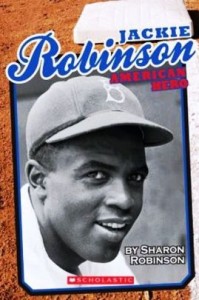 The book opens on a memorable day; a special time, when Jackie Robinson stole home in Game One of the 1955 World Series and set the wheels of desegregation in motion. Then it flashes back in time so that young readers re-live segregation, share-cropping and the day-to-day experience of growing up black in white America.

Children learn that Jackie Robinson’s life was not much different from the life of typical youth of today. He loved his mother, adored sports, and got into loads of trouble doing things he shouldn’t have. Children also learn about the mindset of the times, the obstacles Jackie faced, and how he weathered bullying and cruelty until he realized his greatest dream: becoming a Major League baseball player.

Although the book focuses on Jackie’s rise to baseball fame, it also offers a few surprises. For example, readers learn that Jackie was a multi-talented athlete who played basketball, baseball, football and track, and was named the region’s Most Valuable Player in 1938. He even “set a record for competing in two different sports in two different cities on the same day.”

The author also proudly shares information about how her father, Jackie Robinson, became a Civil Rights advocate who fought Jim Crow Laws and pressed for desegregation.

This book works well across many educational landscapes. It’s the perfect book for young sports enthusiasts, and is a great source of encouragement for any child who, for whatever reason, may feel like an outcast or may be the victim of bullying. It offers history and adventure for independent readers, and also makes a fine addition to any school or public library’s multicultural bookshelf.

This book review originally posted at this link – http://picturebookdepot.com/Multicultural-detail/nighttime-ninja/