Jan Ernst Matzeliger was born in Dutch Guiana, the son of a Black woman and a Dutch engineer.  He began working in his father’s machine shop at the age of 10.  Later, he sailed to America and eventually settled in Lynn, Massachusetts, where he learned shoe making as a trade.  He worked in shoe making the rest of his life.

He invented the lasting machine, which served to revolutionize the shoe industry, and helped to make Lynn, Massachusetts the shoe capital of the world.  His brilliant design was so complex, it baffled everyone that examined it.

His early model was a crude wooden machine, and after ten long years of experimentation, he developed an iron model. He got the idea from watching the shoemakers in the shop he worked in.  They had to work by hand to shape and attach the upper portion of the shoe to the leather sole.  This created a constant bottle-neck, because the shoemakers simply couldn’t work fast enough by hand to keep up with the machine that was making shoe parts.

Jan’s invention held the shoe on the last, gripped and pulled the leather down around the heel, drove the nails in, and then discharged the finished shoe. Where the manual shoemakers once celebrated at making 50 shoes in a day, Jan Matzeliger’s machine made up to 700 pairs of shoes in a day. His invention revolutionized the shoe business and put Lynn, Massachusetts on the shoe map.

Unfortunately, he would never live to see its full potential because he died of tuberculosis at age 36. He was, of course, not mentioned in the early history books, but The First Church of Christ (where he was a member) held a commemoration in his honor in 1967 and called his invention “the greatest forward step in the shoe industry.” 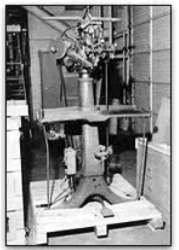 Read more about his life at these links: