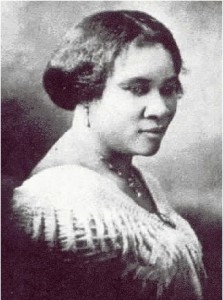 Born to slaves on a Delta , Louisiana cotton plantation, Madame C.J. (whose real name was Sarah Breedlove) was orphaned at age 7 when both parents died of yellow fever. She and her older sister worked as maids until, at age 14, Sara married Moses McWilliams “to get a home.” She was a mother by age 18 and a widow by age 20, and for the next 18 years until she turned 38,

Sara supported herself and her daughter by working as a washerwoman.
Sarah never had much of an education, yet in 1905, she got an idea to start a cosmetics business. At that time, Black women had to place their hair on a flat surface and press it with a flat iron to de-kink it.

Sarah DID NOT invent the hot comb, but she did invent a pomade treatment designed to heal damaged scalps. She claimed an angel came to her in her sleep and told her the formula for the pomade, which consisted of medicinal sulfur and petrolatum. Once her Pomade was applied to the hair, she taught Black women to brush the hair vigorously, then apply the hot comb. The result was shiny smooth hair, and instant popularity for Sarah.

By now she had married a man by the name of Charles Joseph Walker, and she took on his initials, and added the title “Madame” to her name. She employed women she called “Walker Agents” to make housecalls across the United States and the Caribbean and they sold the Pomade and sixteen other beauty products in decorative containers with Madame C.J.’s face on them.

Her fame even spread to Europe, where Josephine Baker, the famous Black dancer, used the Pomade on her coiffure. The French were so fascinated, a French company hurried to devise a comparable Pomade, which they called “The Baker-Fix.” Madame C.J.’s business, which was called The Madame C.J. Walker Manufacturing Company, eventually employed 3,000 people. 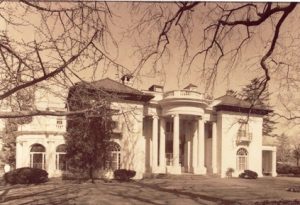 Madame C.J. was a generous donor to Black charities, and made the single largest donation in 1918 when the National Association of Colored Women purchased the home of Frederick Douglass to preserve it as a museum. She contributed to the NAACP, including donating $5,000 to their anti-lynching campaign. She gave to the YMCA and homes for the aged, and funded scholarships at Tuskegee Institute. She also contributed generously to secondary private schools for Blacks. She was also known to give cash prizes to her employees and affiliates.

Madame C.J. died at Villa Lewaro at the age of 51, in May, 1919. The cause of death was hypertension and kidney failure. Her doctors had warned her to slow down because of the hypertension, but she remained active to the end!