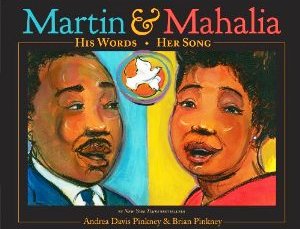 Most historians know who Martin Luther King, Jr. was, what he stood for and what he did to help change the condition of the times, but not many know that he recruited a gospel singer named Mahalia Jackson to help get his powerful message across.

It’s true. In a new picture book called Martin & Mahalia: His Words, Her Song by Andrea Davis Pinkney, readers not only re-live the fire of Dr. King’s message, they get to discover the unusual fuel he used to keep it burning.

The book opens in a segregated America where Jim Crow rules the south. Martin and Mahalia live parallel lives, in which Martin is growing up and learning to deliver sermons in Ebenezer Baptist Church in Atlanta, while Mahalia Jackson is growing up and delivering smoothly powerful songs that draw huge crowds in Louisiana.

Though their talents differ, they both have the gift of the gospel. Martin’s words inspire the downtrodden and oppressed to believe there can be a better life, and Mahalia shatters record sales by selling nearly two million of her latest recording, Move on Up a Little Higher.

That is when Martin realizes he needs Mahalia. With his gift of inspiring people to believe and Mahalia’s gift of keeping people calm and focused through her music, they work miracles. One of the biggest miracles occurs during the March on Washington, when people from all over the nation meet at the Washington Monument to demonstrate for peace. When hecklers try to start a riot, Martin asks Mahalia to soothe the people with a song, as only she can do.

When her song is finished, Mahalia asks Dr. King to “Tell them about your dream!” That’s when he recites his “I Have a Dream” speech.

This is one of those rare children’s books that is the perfect marriage of beautiful prose and unforgettable illustrations. Ms. Pinkney writes in sweet and lyrical tones, and Mr. Pinkney’s illustrations are a celebration of color that make the reader want to jump up and shout with “Amen,” as if the march is happening all over again.

This is one book that the historian, the librarian, or the avid picture book collector shouldn’t miss out on. It should serve well in a history or citizenship class and be used as an advanced example of belonging, bullying, and/or social acceptance.

This book review originally posted at this link – http://picturebookdepot.com/Multicultural-detail/martin-mahalia-his-words-her-song/