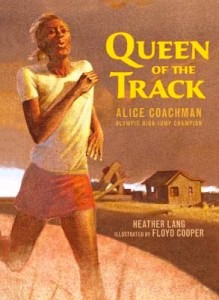 Who would believe that a poor “colored” girl from Albany, Georgia could become queen? But that’s exactly what happens in author Heather Lang’s lovely new picture book, Queen of The Track: Alice Coachman, Olympic High-Jump Champion.

In the book, young Alice can’t stop herself from running and jumping, even though it’s considered un-ladylike. Her father is displeased and people talk about her, yet Alice keeps right on running – barefooted, most days, because she’s so poor. By the time she is in seventh grade, people notice her talent after she beats both high school and college girls at a track meet. She even uses her speed and endurance to deliver food to devastated Georgians after a tornado destroys their homes. From there, Alice overcomes many obstacles to eventually arrive at the 1948 summer Olympics in London, England, where King George VI shakes her hand – something that would never happen in segregated Georgia – and presents her with a gold medal. The very first ever awarded to an African American woman.

This is a lovely and timely book, debuting only a few months before the 2012 Summer Olympics. Illustrator Floyd Cooper offers readers a breathtaking view of rural, segregated Georgia, from the dusty brown Georgia clay Alice ran across as she honed her skills to the humble cabins and shacks that fade to a sandy, serene brown behind her. The illustrations are done in pastel, and range a young, shoeless Alice soaring across an imaginary obstacle to an older Alice standing attention at the podium as she accepts her gold medal.

This book can be used across many disciplines, including art, social studies, American history, African American history, and even sports. There is a wonderful section at the end that called “More About Alice Coachman” that includes a photo of a young, smiling Alice, a photo of Alice soaring through the air as she makes her record-breaking leap during the Olympics, and a quote that illustrates Alice’s philosophy about what to do when the going gets tough. There is also a detailed bibliography, including websites and videos that give more information on Alice Coachman.

For a picture book experience in text, illustrations and “story,” be sure to grab a copy of Queen of The Track: Alice Coachman, Olympic High-Jump Champion.

This book review originally posted at this link – http://picturebookdepot.com/Book_Reviews-detail/queen-of-the-track-alice-coachman/