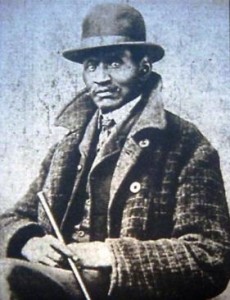 Randolph Miller was born a slave in 1842 Virginia. He belonged to Dr. Robert W. Curran.

When General William T. Sherman’s army marched through Georgia, Randolph Miller was with them. He came to Chattanooga in 1864 as a ward of the army — which may mean that he was not exactly free — and chose to remain in the city after the war.

He found a job with the Chattanooga Daily Gazette, and although his job was simply to manually turn the press, he apparently developed a love for the written word and eventually launched his own paper.

He called his paper The Blade, and although many people labeled him as eccentric and illiterate, he soon became one of the most quoted editors in the entire nation.

African Americans of Chattanooga: A History of Unsung Heroes (see above link and book jacket).