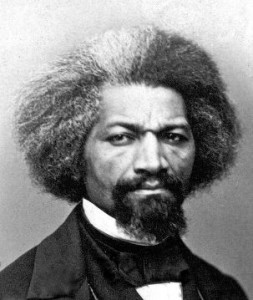 The Slave Who Re-Invented Himself
© Copyright November 2008, Rita Lorraine Hubbard. All Rights Reserved.

If you thought the concept of re-inventing yourself originated in our lifetime, you are sadly mistaken. This man re-invented himself — and did it well — over 150 years ago.

Frederick Douglass was born on a farm in Maryland in February, 1818. His mother was a slave woman named Harriet Baily. He had no real clue who his father was, except that he was white.

Frederick was put to work in the fields at age six, and like the other slaves, was often beaten and starved. One wife of an early master took a liking to him and taught him to read from the Bible. Her husband quickly put a stop to this “mischief.” But once Frederick caught the learning bug, nothing could stop him. He often exchanged pieces of bread for reading lessons. He even watched workmen in the shipyards as they wrote letters and numbers to label the timbers and masts. Then he copied what he saw.

The details of Frederick’s freedom is better left to his autobiography. However, suffice it to say, at age 20, Frederick disguised himself as a sailor, boarded a train going north, and arrived at the Underground Railroad in New York City.

He joined the American Anti-Slavery Society and began lecturing to various audiences. When some in the audience claimed he was too educated and well-spoken to have ever been a slave, Frederick solved this dilemma by penning his autobiography, Narrative of the Life of Frederick Douglass.

Imagine that–a slave from the lowly fields of bondage re-invented himself, and became an American author!

Frederick became an overnight success. His book was a best-seller in the North and even sold well in European countries. But Frederick refused to forget where he had come from, and vowed in his heart to help those he had left behind in the fields.

He traveled throughout Europe, speaking about the evils of slavery to enthusiastic crowds. Then he started a newspaper called The North Star, a weekly abolitionist paper that also supported equal rights for women. It ran for about 16 years.

After Congress passed the Fugitive Slave Act in 1850 (which required that runaway slaves be returned to their owners), Frederick joined the Underground Railroad. When rumors of war erupted, he proudly announced he was willing to fight to help free his black brothers and sisters. Frederick was so impressive, President Abraham Lincoln held two private meetings with him! In fact, Frederick played an important part in seeing that African Americans were allowed to fight in the Civil War.

Of course Frederick did much more in his lifetime, including accepting the post of U.S. Marshall for the District of Columbia. But time and space will not allow for many of his deeds to be recorded here.

HE PERSEVERED: How William Lewis of HAMMERING FOR FREEDOM Inspired Me to Keep Moving Forward 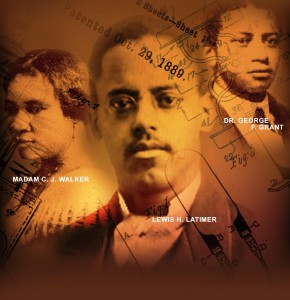 Come see me at my namesake:
"Rita Writes History"
http://ritahubbard.com