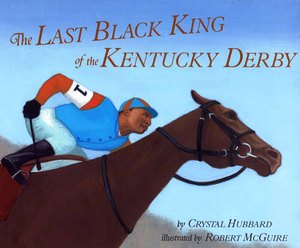 There are many kings in our African American background, and that includes racing kings. The Last Black King of the Kentucky Derby by Crystal Hubbard is the story of one such unforgettable king.

The book chronicles the life of Jimmy “Wink” Winkfield, the son of sharecroppers in Chilesburg, Kentucky, and the youngest of 17 robust siblings.

His first love was riding horses and his second love was watching horse races at a nearby track. It is no surprise, then, that he began working at a track when he got older, where he learned to race and handle the horses himself.

This situation opened doors for him, including an opportunity to ride a horse for the son of the mayor of Lexington. He lost that race, but he continued to work hard to improve his skills so that by 1901, he had 161 wins under his belt, including his first Kentucky Derby Win.

Ms. Hubbard’s prose is age-appropriate and nail-biting good. She describes, heartbeat-by-heartbeat what each win is like for Wink; how he feels the sweat of his horse beneath him, hears the snort of its nostrils and the thud of its hoof beats as it pushes itself to give its all. She also describes the pride of winning the Derby two times in a row, the racism of the times, and the pleasure of overcoming the odds to go down in history as a true hero.

Artist Robert McGuire makes Ms. Hubbard’s prose even better with sketches that are alive with color and movement. Readers get to see thundering hooves close up, the intense faces of determined jocks, and the flaring nostrils of the beasts they command.

This is an inspirational book that is documented proof that no matter what a person’s station, that person can pick him- or herself up by the bootstraps and go down in history as a person of note. This is proven by the fact that Jimmy “Wink” Winfield evolved from the poor son of struggling sharecroppers to a jock who rode the horses of Russian czars, Polish princes and German barons.

This book also posted on Picture Book Depot at THIS LINK: