Hello Everybody!
The movie we’ve all been waiting for — Bessie, starring Queen Latifah– is here!

That’s right, Bessie Smith, Empress of the Blues and native Chattanoogan, will be featured on the big screen in just a few days and I will be among a few LUCKY Chattanoogans to view the screening.

Bessie Smith was one of seven children born to former slaves William and Laura Smith. She grew up poor in a lower income neighborhood called Blue Goose Hollow, and by the time she was nine years old, both her parents were dead. To help feed her family, Bessie attended West Main Street grammar school in the mornings and performed on the streets with her brother Andrew in the afternoons.

When Bessie finally left Chattanooga for Decatur Street, the black entertainment district in Atlanta, she went on to meet the one and only Ma Rainey–one of the biggest influences on her life.

By the 1920s, Bessie was a leading artist in black shows on the Theater Owners Booking Agency (TOBA) circuit and at the 81 Theater in Atlanta. In 1923 her first recording—“Down Hearted Blues”—was a overwhelming success. It sold an unprecedented 780,000 copies and established Bessie as one of the most successful performing artists of her time.

Bessie’s story has way too many twists and turns to be successfully featured on The Black History Channel. Instead, we’ll leave you with a few great links and with our encouragement to get out and see the movie.

The Rock and Roll Hall of Fame – https://rockhall.com/inductees/bessie-smith/bio/ 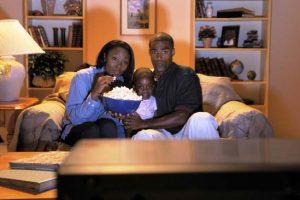