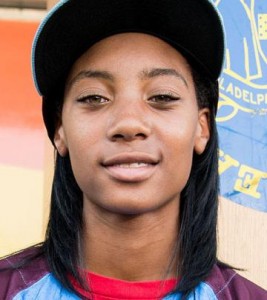 Mo’ne Ikea Davis will be 14 years old this year. What’s so special about that? Well, she is the first girl ever to earn a win and to pitch a shutout (with a 70 mph fast ball!) in Little League World Series history (2014), that’s what.

Born in 2001 in Philadelphia, Pennsylvania, this young right-handed pitcher for the Taney Dragons threw “perfect spirals in the outfield” that took the world by storm last year. In the proces, she made the cover of Sports Illustrated in 2014, and became the sixth girl to collect a hit in Little League World Series history.

All this, and guess what? She actually wants to play basketball, not baseball! At least that was the word in 2014.

There is a world of information about Mo’ne Davis on the Internet. Here are just a few links to some great articles. Enjoy!

Perfect Spirals in the Outfield – http://www.si.com/more-sports/2014/08/20/mone-davis-taney-little-league-world-series

Our Children Can Soar: A Celebration of Rosa, Barack, and the Pioneers of Change

Sit-In: How Four Friends Stood Up By Sitting Down

Muhammad Ali: A Champion is Born