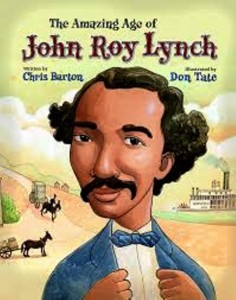 People have been re-inventing themselves for centuries. Perhaps some of the most amazing reinventions were the ones that happened during the reconstruction era, when African Americans found themselves suddenly free, on their own, and fully expected to thrive in their environment—-whether they were prepared or not.

John Roy Lynch reinvented himself. In author Chris Barton’s latest picture book, The Amazing Age of John Roy Lynch, John goes from the disease-riddled cotton fields of Louisiana to serving as Justice of the Peace to serving as a US Congressman—and all in a brief ten years.

John was born a slave, but since the plantation overseer loved his mother, he enjoyed a semblance of safety in the early years of his life. His father’s plan was to purchase freedom for John, his mother and his brother. Unfortunately, he died before this could be accomplished and the friend he had asked to carry out his wishes sold John and his family to a Louisiana slaveholder instead.

John worked in the big house for awhile but was soon banished to hard labor in the cotton fields. When the Civil War came along, John was already well into his own emancipation. He worked as a waiter on a Union steamer, then moved up to the job of “cook”. After the war ended, he remained in the south, working as a photography assistant and later as the managing photographer. He taught himself to read and write by eavesdropping on a school for white children, and soon he was writing and delivering eloquent speeches to the Natchez Republican Club.

He bought land, became Justice of the Peace, and settled arguments among both blacks and whites. He was elected to the Mississippi House of Representatives, and later became Speaker of the House, pushing tirelessly for the day “when every man, woman and child [could] feel and know that his, her, and their rights [were] fully protected by the strong arm of a generous and grateful Republic…” 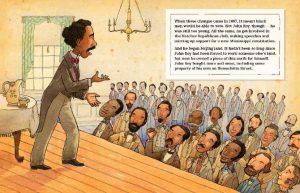 The Amazing Age of John Roy Lynch is so much more than a picture book; it is a biography of slavery, the brutality of the civil war, the hope and eventual demise of reconstruction, and the high adventure of one resilient man. The word length is a bit longer than the typical picture book, but this is forgivable considering Mr. Barton’s meticulous examination of Mr. Lynch’s life.

Artist Don Tate’s illustrations are as bold and strikingly beautiful as always, but they do not sugarcoat the explosiveness of the Jim Crow south; readers will see some angry, contorted faces, a few burning houses, and even a noose or two just waiting for the nearest unfortunate neck.

Still, this is definitely a book worth adding to your library. It includes a historical note on reconstruction, and author and illustrator’s note, a detailed timeline, a map of the reconstructed states of the United States, and a very nice “For Further Reading” section.

All of this combines with text and illustrations to depict the whirlwind of change, hope, and the infinite possibilities that defined this rocky time in American history. The book may well be introduced as a precursor of an American history book for the burgeoning history buff of tomorrow. It might also be used to open discussions about occupations, self-identity and the basic human need to adapt to an ever- changing landscape.