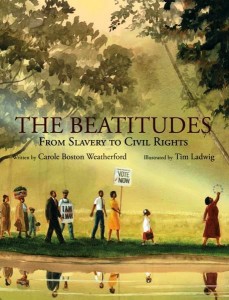 One of the loveliest picture books out there actually debuted over five years ago. It is called The Beatitudes: From Slavery to Civil Rights, by Carole Boston Weatherford, and it is a book both quiet and powerful.

Though it is a brief 32 pages, this book spans a lifetime of struggles and desires–from the brutal days of the middle passage, to Harriet Tubman bravely leading slaves to freedom, to Barack Obama taking office as the first African American president in United States history.

All of this power, glory and “story” is set against the backdrop of one of the most momentous lessons from the bible: The Beatitudes.

Readers familiar with the bible will hear, through Ms. Weatherford’s powerful prose, God speaking to African Americans and demonstrating how He has been active in their destiny since the beginning. She writes:

“I was with the Africans who were torn from the Motherland and cramped in the holds of ships…I heard them chant: Kum ba ya, Kum ba ya.”
“I was the star that guided them North.”
“I beat the drum for freedom [during the Civil War]”
This is one of the most powerful picture books out there. Not only does Ms. Weatherford’s prose hit readers with a jolt of emotion, but artist Tim Ladwig pours his all into sweeping illustrations of African Americans rising from the ashes. These two elements combine to capture the joy, grief, bewilderment and ultimate victory of the African American survivor…from slavery to Civil Rights.