The Power of Love!

FOR YOUR ENTERTAINMENT, here are the Globetrotters in a 1956 promotional film accompanied by their theme music, Sweet Georgia Brown by Brother Bones. Yes, the film is old, but you still won’t miss the incredible talent these players had. Oh, they made us so proud! 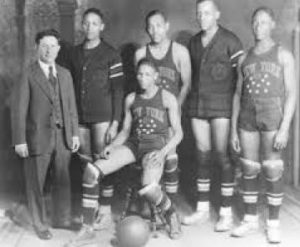 THEIR STORY (CONDENSED)
Once upon a time in 1926, a Chicago man named Abe Saperstein founded a team called the “Savoy Big Five.” Their first game was on January 7, 1927. Soon, their name changed to “Saperstein’s New York Globetrotters”, and then “Harlem New York Globetrotters.” They eventually sported the name the “Harlem Globetrotters”, which demonstrated in no uncertain terms that all their members were African American.

They faced the usual prejudices of the time, including the fact that “professional” teams of that era were always white. So Mr. Saperstein had to put in overtime trying to book games for them.

By 1950, the NBA began to draft African American ball players, so it was a bit difficult for the Globetrotters to keep their competitive edge. Plus, they began to be stereotyped as an entertainment team, even though they did play serious ball.

They pushed on and played on, racking up serious wins throughout their career. Today PBS.org writes that the Harlem Globetrotters have “played in over 115 countries for more than 120 million fans, and have scored over 20,000 victories and only 332 losses. They surpass every other team in the history of sports for number of games played.”

The Black History Channel won’t attempt to tell their glorious story in a one-page post. To learn more about the Globetrotters, please click on these links:

History of The Harlem Globetrotters

17 Facts About The Harlem Globetrotters