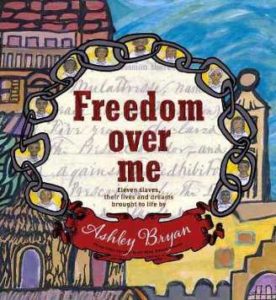 This is a fitting quote for author and illustrator Ashley Bryan’s latest moving picture book, Freedom Over Me: Eleven Slaves, Their Lives and Dreams Brought to Life, because these eleven lives not only withstood challenge and controversy, they also withstood anonymity…until Mr. Bryan came along to tell their story.

Many years ago, Mr. Bryan came into possession of an “Appraisement of the Estate” document involving eleven slaves, some cattle and some cotton that were about to be put up for sale after a plantation owner died and left his widow to maintain his estate. Because the widow did not feel she could manage the estate alone, and because she had heard of slave insurrections in other parts of the country, she decided to price her “possessions” and then return to her native England.

Mr. Bryan felt compelled to tell the stories of these slaves who had been put up for sale alongside the cotton and the cattle. However, as happened with most slaves at that time, most of their personal details were left off of the appraisement. There were no photographs to match with names; there were no ages to distinguish who was really a “boy” or a “girl,” or whether they were simply being addressed as most slaves were — as children. All Mr. Bryan had was his connection to their stories and the whispers of ghosts from the past. But sparse though his documentation was, Mr. Bryan was still able to masterfully weaves the tale of the eleven slaves whose fates were entangled with slavery laws of the day and a widow’s desire to leave the past behind and return to her country. 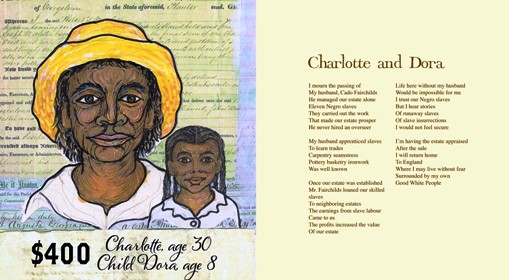 Mr. Bryan began the important undertaking of telling their story by first creating painted portraits of each slave. Then he looked at what he had created and “listened for their voices…writing what I heard in free verse to give emphasis to their words.” From there, he dedicated an accompanying page to their inner thoughts; their dreams of their past lives in Africa (if they could remember) and their hopes for the future.

Among the eleven, there is Peggy, the plantation cook who is praised for her delicious dishes, but whose secret passion is “to hear the slaves call me Herb Doctor;” Stephen, the plantation carpenter who dreams of “designing and building homes for people in all climates throughout the world;” and young John, a 16-year old who tends cattle and carries messages on the plantation, but who secretly wants to be an artist and “create loving portraits of their [Negro people] strength and beauty.”

This is a powerful and moving book about talents and dreams and the injustice of “pricing” and “owning” a fellow human being. The prose is plain and straightforward, and so authentic that readers will feel they are actually hearing the slaves speak their minds. The artwork has a rough and rustic look, a perfect depiction for the “not-soft” life that the slaves must have lived from day to day.

Use this book during discussions about citizenship, occupations, slavery, gifts and talents, and the undying desire to live completely free.