It’s true that we all face adversity and no one person’s trials or pain is any less than anyone else’s. In fact, if we put our minds to it, we could all probably win at the game of “I can top that.” However, that’s not what this post is about. This post is about a child prodigy who fell in love with the piano at the age of 5 but ended up partially-paralyzed at the age of 10 after a violent encounter with his father.

The year was 1948 and the child was Norman Malone. Norman was one of three brothers born to a loving mother and a violent father. His father was so violent and scary that “Mrs. Malone would ask Norman to stay up late to protect the family.” But since Norman was only a kid (10 years old), he fell asleep one night, and woke up partially-paralyzed. His brothers were partially-paralyzed after the violence, too. 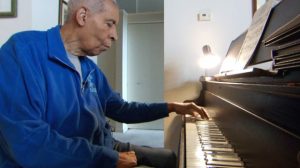 Since The Black History Channel is all about positive experiences, we won’t go further into this tragic episode. We will just emphasize that young Norman thought he would never be able to play the piano again. But according to writer of CBS News Correspondent Steve Hartman, Norman “learned that there are actually scores of scores written specifically for the left hand. And for more than 60 years now, he’s been practicing them in private.”

In the meantime, enjoy CBS’s video.