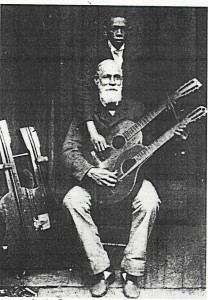 Samule E. Davis was born in Crawford County, New Jersey during the years when slavery still existed. It is unknown whether he or anyone in his family were ever slaves; however, in 1847 he traveled to New Orleans as a free man and began a successful career as a riverboat musician. He penned several original compositions and also briefly served as leader of an all-German band of musicians.

Sam was a versatile man who was well-known across the country as “the man who could do anything.” He was a cabinet-maker, wagon-builder, boat-maker, and metal worker. But before he made any of these items he first made original tools to work on the items. His mechanic shop was said to be the most unique and complete in New Orleans because he had tools no other mechanic possessed–or had ever seen! With these tools he fashioned dazzling pieces of furniture out of the very finest and most expensive wood available. His rare skills were so in demand that most citizens would not let anyone except Sam touch their furniture. They said, “If Sam can’t fix it, send it back where it came from.”

Many of Sam’s inventions and original creations ended up in places of great importance, such as the US Custom House, the New Orleans Cotton Exchange, the Crescent City Jockey Club, and various other private clubs and residences that were mostly patronized by whites. One of his original creations went to President William McKinley and another rare piece–a beautiful judge’s gavel of rosewood and mahogany, went to the Chairman of the Republican National Convention.

A third original invention went to President Theodore Roosevelt’s daughter, Alice. For her Sam fashioned a daintily-curved violin made of rich mahogany wood, inlaid with mother-of-pearl, and trimmed with cypress. The keys, fingerboards and body were all made with his own hands! When it was finished the violin was said to have “the sweetest and rarest tone of any violin ever heard.” For Sam’s generosity, President Roosevelt sent a letter of thanks through his personal secretary.

In the photograph above, Sam is demonstrating how to play one of his inventions: a double-base guitar with traveling case. This unique invention could be played as one instrument or as two–a feat that was unheard of at that time.

In his lifetime Sam invented many other fine objects, including a folding step-ladder, a disappearing ironing board, an extension measuring rod, a revolving tool rack, a cravat press, an adjustable blade for tongue and grove plane, a clamp for setting guitar bridges, and a clamp for hairing violin bows.

Since he failed to patent his inventions, Sam would never get the true credit for them. The Colored American magazine ran an article on him in 1902, which may well be the only credit he will ever receive for all the wonderful things he invented.

This article is an original and appeared in the 2007 edition of Shades of Greatness(tm): A Calendar Tribute to Early African American Inventors. All Rights Reserved, Rita Lorraine Hubbard.