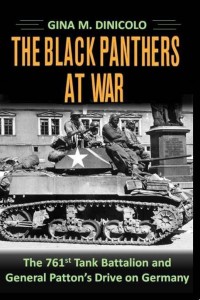 The Black Panthers at War: The 761st Tank Battalion and General Patton’s Drive on Germany is a military masterpiece that chronicles the lives, victories, and in some cases, deaths of crew members of the first African American tank unit to see combat in WWII. Written by author, researcher and historian Gina M. Dinicolo, this novel brims over with exquisite detail that leaves readers feeling as if they’re right in the thick of battle.

This unique battalion unit was dubbed the “Black Panthers” because of their lively insignia of a snarling black panther with ears curled back, ready to devour; and the motto: “Come out fighting.” Brave, ambitious and proud to be American, they were ready and willing to fight for their country, but suffered racism, separatism, beatings and even murder at the hands of white soldiers during their quest to be treated as military equals.

After eventual clearance for combat, and “Old Blood and Guts” himself–General George S. Patton, rallied behind them. Even though he had doubts about the abilities of the 761st and other African American military men, he still sang their praises: “You’re the first Negro tankers to ever fight in the American Army. I would never have asked for you if you weren’t good. I have nothing but the best in my Army.” (P. 142)

He was right; they were the best. It took years of fighting racism, discrimination and enemy battles to prove they were the best, but the day finally came when this amazing unit was awarded the Presidential Unit Citation by President Jimmy Carter on January 24, 1978.

The Black Panthers at War is a “sleeper” that may seem like an ordinary war story, but actually shines like a rare military jewel. Ms. Dinicolo is an extraordinary writer whose prose is fast-paced, matter-of-fact, and packed with astonishing detail. With relentless precision, she presents the collective and individual stories behind the 761st Tank Battalion so that it unfolds like a movie on the silver screen.

The book offers rare black-and-white photographs of the battalion crew, including a photo of a young and hopeful Jackie Robinson (P. 127), who wanted to enroll in Officer Candidate School but was blocked due to army policy against black males. Robinson was later threatened with court martial after he refused to move to the back of a bus. There are also photographs of battalion tanks, German fighters, and even a map of the 761st’s route.

The back matter includes detailed notes and references, an extensive bibliography, a meticulous alphabetical index, and an acknowledgement page that explains how Ms. Dinicolo was able to harvest so much precious information about each soldier’s life.

This is an amazing book that deserves a permanent space on the book shelf of any history buff, professional historian, or higher education classroom.