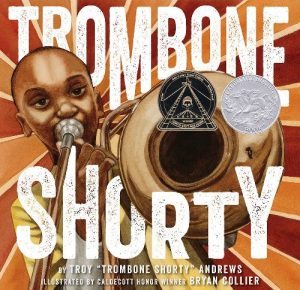 Some people are born to perform. Troy “Trombone Shorty” Andrews is one of those people, and he explains all about it in his 2015 bestseller, aptly named Trombone Shorty.

Trombone Shorty is the story of a little fellow named Troy Andrews, a young African American male from a musical family in a musical neighborhood called Treme’ in the very musical city of New Orleans, Louisiana. Troy’s brother James plays the trumpet and leads a band of his own, and Troy is so mesmerized, he blows an imaginary horn and pretends to be in the band, too.

Troy grows up attending Mardi Gras parades and festivals, and adores music so much that he and his friends start their own band with instruments they make themselves. Then Troy finds a beat-up, broken trombone that is actually bigger than he is. In fact, it is so heavy that Troy falls right over as he tries to hold it up while he plays. 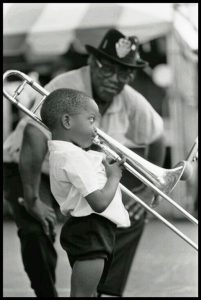 When James spots Troy blowing his big trombone, he christens his little brother “Trombone Shorty,” and the name sticks. From then on, Trombone Shorty eats, sleeps and dreams all things “trombone.” But it is only after being called to a concert stage by the one and only Bo Diddley that little Troy becomes aware of his own talent.

This is a delightful little book about raw talent and determination that is sure to inspire children of all ages. Readers learn that even though Troy lives in poverty, his situation does nothing to stop his dreams of having his own band. First he blows a pretend-instrument in his brother’s band, then he makes his own instrument, and finally he finds a trombone and teaches himself to play. 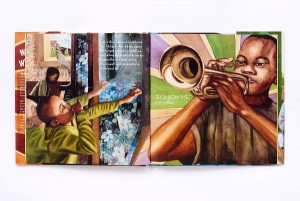 Readers learn about Louisiana, the Mardi Gras, and what it’s like to grow up in a musical family. They learn colloquial expressions like “Where y’at?” (New Orleans’ way of saying hello), and they learn that raw talent and determination can take you places.

Author Troy “Trombone Shorty” Andrews’ prose is quaint, friendly and spot-on for young children. Artist Bryan Collier’s illustrations are rich, ripe and full of emotion. They are the chocolate icing on top of this lovely book for young musicians.

Use this book as a supplemental history lesson, or as a jumping-off point for discussing talent, drive and determination. It can also be used to study regional history, neighborhoods, or even the road to fame.