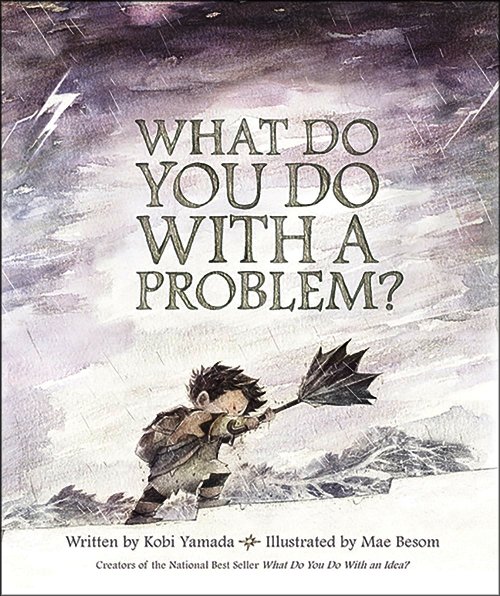 Children should experience all types of things in their young lives, but a “problem” isn’t one of them. Unfortunately, problems beset people of all ages, and children aren’t exempt.

That’s the premise of author Kobi Yamada’s lovable 2016 picture book, What Do You Do With a Problem? An otherwise cheerful little MC suddenly discovers he has a problem. The worst part is that he has no idea where it came from, what it wants, or when it’s going to leave. He asks the problem all the right questions, like, “Why is it here?” and, “What does it want?” But the problem never answers because problems don’t talk. They just follow their target around until he or she solves them.

This is an amazingly clever picture book about what it feels like to be hounded by a problem. Although the subject is serious, the prose is delightfully innocent, like when the MC disguises himself so the problem won’t recognize him. Isn’t that adorable?

The illustrations (by Mae Besom) are soft and kid friendly and done up in somber pastels and pencil grays. With each page turn the dark cloud gets bigger and darker, an at-a-glance way of explaining how a small problem can become a bigger one if it isn’t addressed.

Use this book to begin discussions about how to face problems and what happens when you don’t face/address problems. It can even be used to brainstorm about the various types of problems children face at different ages.