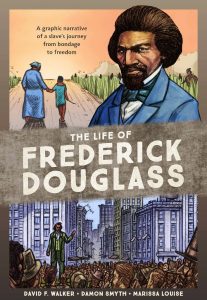 The story of Frederick Douglass’ early life as a slave and his decades-long struggle to break free is not new to American readers, but seeing it unfold in achingly beautiful illustrations of brutality and hope certainly is. This mixture of despair, perseverance and hope – in pictures — is just what readers get in author David F. Walker’s newest graphic novel: The Life of Frederick Douglass: A Graphic Narrative of a Slave’s Journey From Bondage to Freedom.

There are several autobiographies on Frederick’s life, complete with long paragraphs of text that outline the hardships, cruelty, and humiliation he suffered in his life, but this version of his book is practically interactive. Readers are right there with Frederick when he is separated from his mother, brutalized by his keeper (Aunt Katy), and starved and beaten simply because there is no law that says he shouldn’t be. Readers live Frederick’s confusion over the fact that he has never seen his mother more than four or five times before she disappears completely (she dies!); they feel his loneliness and despair when his grandmother leaves him at his new plantation-home; and they can almost hear the growling and feel his stomach-cramping hunger when the sadistic “Aunt Katy,” the woman assigned to rear all the motherless slaves, starves him out of spite.

They smile at Frederick’s innocent pride when his owner’s wife teaches him to read, and they cringe when the owner declares that “learning will spoil the best n*gger and make him forever unfit to be a slave.” When Frederick decides he is going to learn to read someday, no matter what anyone says, readers cheer him along.

There are passages of the great speeches Frederick Douglass wrote and delivered during his lifetime; illustrations of calloused, shackled African American feet trudging along as Frederick watches from a window; true tales of Frederick being choked, whipped, struck in the face and kicked while “the Negro breaker” is trying to make him fit for slavery; and just-in-the-knick-of-time rescues when silent slaves feed and clothe Frederick so that he can face another day.

This book is a masterfully-told, sweeping saga about early America, a slowly-changing mindset, and one man’s resolve to one day be free. It is filled with heroes like John Brown, villains like the Auld brothers who fought hard to return Frederick to slavery, and love interests like Anna Murray, the young free African American woman who helped Frederick escape slavery.

The prose is fast-paced, forceful, and unapologetic. The illustrations are bold and often shocking, and the colors are rich with orange sunrises, patchy black, starless nights, and honey-brown-skinned resolve to live everyday as free as any man. There is a clever “Who’s Who” wall of faces at the beginning of the book to give readers an idea of the people who crossed Frederick’s path, and what part(s) they played in his life.

There is a detailed list of sources at the end of the book, in addition to an alphabetized index and an acknowledgement by the author. The book takes several clever detours throughout the story in order to give more details on the history of slavery and an explanation of the Civil War. There is also a section that offers several photographs of Frederick Douglass, and details of how he is believed to be “the most photographed American of the nineteenth century.”

Both adults and young readers ranging from upper elementary and middle school to high school should enjoy this real-life thriller about courage, despair and an unbreakable human spirit.