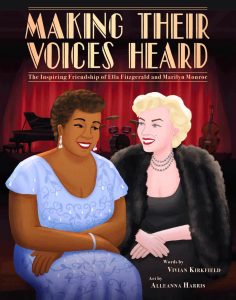 We live in a time when women are taken more seriously than ever; a time when they are definitely making their voices heard. But it was not always this way. There was a time when great singers like Ella Fitzgerald were celebrated in other countries, but turned away from American clubs and theaters because of racial discrimination. There was also a time when a woman named Marilyn Monroe was considered the ultimate standard of beauty, yet when she dared voice an opinion or requested movie roles that did not objectify her, she was laughed at or ignored.

Enter the new picture book, Making Their Voices Heard: The Inspiring Friendship of Ella Fitzgerald and Marilyn Monroe, by Vivian Kirkfield, which takes readers back to the time in history when Ella and Marilyn were powerful women who had to use their friendship to break down barriers and make their voices heard.

In the book, Ella Fitzgerald is singing her way to stardom. No one denies that she is talented, but no matter how much people adore her sound, she is barred from stage and television because of her skin color and her ‘not-so-glamorous’ looks. In the meantime, Marilyn Monroe is another big star who is not taken seriously. She knows she can act and sing, but movie producers only want her to be flighty and beautiful.

Both women are frustrated, but neither of them give up. Ella keeps right on singing, and Marilyn keeps requesting better scripts. Then one day it happens; Marilyn gets a script that calls for a BIG singing roll, and she decides to study her favorite singer — Ella Fitzgerald — so she can learn “tempo and tone.” 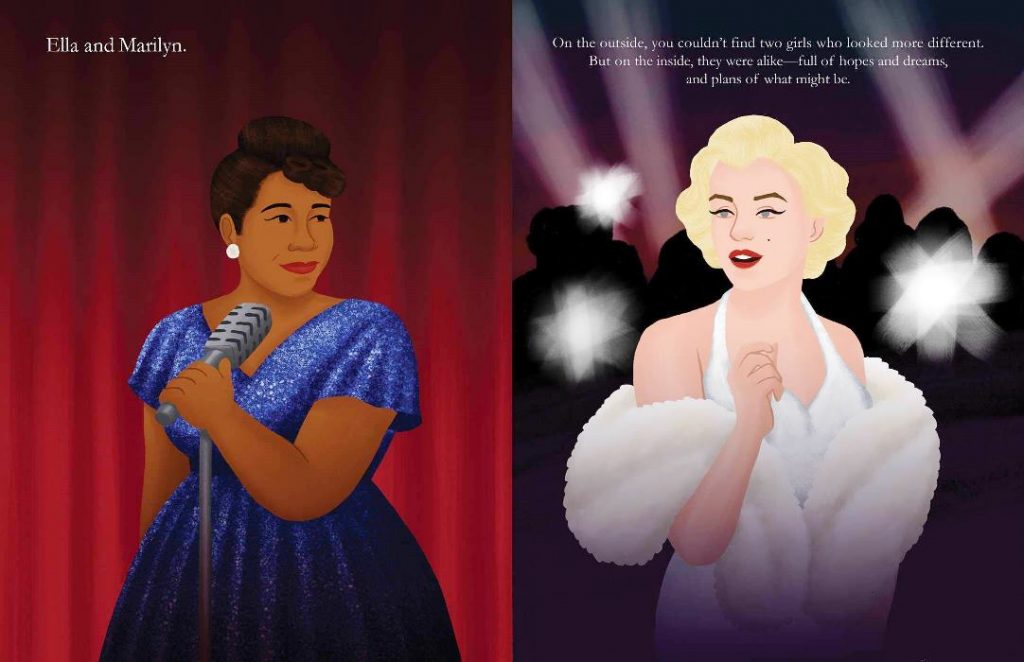 It works! The critics love Marilyn’s new sound, and from then on, the men in charge listen when she speaks. Knowing she could never have done it without Ella’s music, Marilyn attends one of Ella’s shows so she can thank her in person. That same evening, the two stars become fast friends — and hatch a plan to “open some doors” so Ella can sing in a well-known nightclub.

Making Their Voices Heard breathes new life into an almost-forgotten friendship that is an important reminder that not everyone sees color. Ella Fitzgerald and Marilyn Monroe were as different as night and day, and each rose to stardom via their own talent and hard work. Neither of them needed the other to become a star, but their friendship helped them to do something stardom hadn’t been able to do: it helped break down barriers that should never have been there in the first place. Too cool!

Ms. Kirkfield’s prose is fast-paced enough to keep children turning pages, and the vocabulary and story line are spot-on for both elementary and middle grades students. Artist Alleanna Harris’ illustrations capture the glamor of Hollywood, the hard work and raw talent of a rising jazz singer, and the smiles and facial expressions of two iconic women who know they belong in the spotlight.

This book should do well in both elementary and middle grade classrooms. Teachers can use it to open discussions about early interracial friendships, the Jim Crow era, stardom privileges and limitations, occupations, choosing your own friends, and even the simple concept that there is strength in numbers.

It debuts on January 28, 2020 and will be a great addition to your child’s personal bookshelf.