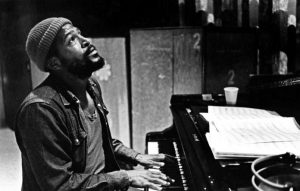 So. Listening to the amazing vocals in this amazingly moving song by Marvin Gaye takes me way back, to bitter-sweet times of my early teenage years when discrimination and brutality ran rampant, and we all wondered when it would end. It seemed no one knew how to communicate with black teenagers or adults. There was, in fact, a great divide…until this song debuted. When it hit the air waves, everyone — and I mean everyone — fell silent and listened. And then we played this song over and over, because it said what was on our minds; it asked the very question that we had been wondering all along: What’s going on?

One more tidbit: Marvin Pentz Gaye, Jr. was born in Washington, D.C., on April 2, 1939 and died on April 1, 1984 when he was shot and killed by his father after a physical altercation. His father claimed self-defense but was later convicted of involuntary manslaughter. We won’t attempt to tell Marvin Gaye’s entire story here. We will leave that for a later time.

And now, to the song. Remember…and enjoy.