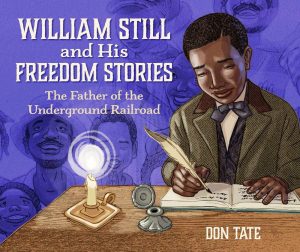 There are so many amazing stories of African Americans who escaped slavery in daring ways. But even more amazing is the fact that few people know about the man who wrote hundreds of these stories down. That man’s name is William Still, and his story is told in a lovely new picture book by author/illustrator Don Tate called William Still and His Freedom Stories: The Father of the Underground Railroad.

The book opens with William’s father deciding to run away rather than face the lash. Later, his escaped and joined his father. She took her two daughters with her, but was forced to leave two sons behind. Many years later, William was born. He was the youngest of sixteen children.

Over the years, William learned to read . He fell in love with emancipation stories, never knowing that they would become a part of his life. He eventually took a job with the Pennsylvania Anti-Slavery Society, working his way up the ladder until he became manager of the society. In his new capacity, William helped “freedom seekers” — runaway slaves in search of a new life. But one day he met a freedom seeker who changed his life. The man was older, stooped and gray, but this was not the surprise. The surprise was that the man’s name was Peter, and he told William the names of his mother and father. These names were identical to William’s parents’ names.

In short, William had just met Peter — one of his brothers who had been left behind in slavery! From then on, William began recording important details about runaways, including their slave names and their new names, so that their families could find them if slavery ever ended. Over the years, he recorded details for a couple named William and Ellen Craft, and for a clever young man called Henry “Box” Brown.

This is an amazing little book about an amazing man and his amazing calling in life. The illustrations are rich and warm, and the facial expressions are somber, determined and joyous all at once. The prose is age appropriate, and although the manuscript is a bit lengthy (necessary because William Still accomplished a LOT in his life!) there is never a dull moment. Use this book as supplemental reading for upper elementary or middle grade Black History classes. The book is also great reading for American History classes and citizenship classes.

THE ENTREPRENEUR WHO BOUGHT…HIMSELF, PART II

FIND YOUR FOLKS: Searching for Your Chattanooga Ancestors