Have you ever wondered what humanity looks, feels, tastes, and acts like once it imbibes alcohol and other substances during one night in the city of angels? Have you ever asked that same question of a man who observes and interacts with this particular brand of humanity, while having a delicious wit that would best be described as the bastard child of Larry David and Dave Chappelle? Well, the answer to both of those questions is this book: HEY DOORMAN VIII. 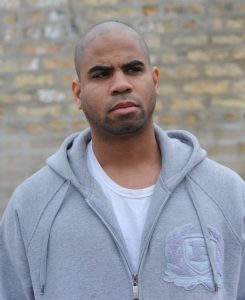 Hi all,
My name is John P. Kildemm and I have been writing professionally for over ten years. Some of you may know my work from The Eric Andre Show, which is on AdultSwim (late night Cartoon Network) and has been running for four years. It’s the most crazy/shocking/hilarious talk show on television. I have also written for and/or performed on NBC, Comedy Central, and CBS where my name appears in the credits as Haji Outlaw. Here is a link to a CBS sketch I wrote featuring Baller’s (HBO) London Brown and Office Christmas Party’s Fortune Feimster: It’s called Drive.

Due to the volatility of the business of Hollywood, I use my second job as a bouncer to display my comedic expertise in book form. This experience has led to four comedy memoirs thus far.

You can catch me performing my own unique brand of stand-up comedy in the greater Los Angeles area. Due to a busy writing schedule, please contact me on Twitter for my performance dates in LA, which are often at the Improv and the Josh & Josh show. (By the way, I started performing in my hometown of Chicago and have been doing for over ten years since). Prior to this, I received a Bachelor’s degree in electrical engineering, and prior to that, I had a great deal of fun.

There are no reviews yet.

Only logged in customers who have purchased this product may leave a review.

Visit My Other Sites