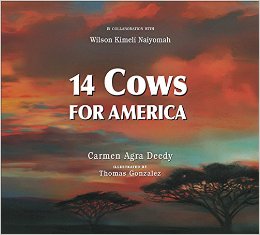 This is a story that crosses vast oceans and glaringly different cultures to warm the hearts of American readers. 14 Cows for America, by Carmen Agra Deedy, is a beautiful story of comfort and healing during America’s darkest hour.

It is the story of Kimeli Naiyomah of the Maasai people of Kenya, who witnessed the terrorist attacks on the World Trade Center while studying medicine in America. Unable to forget what he had seen, Kimeli carried the sorrow of that tragic day back to his village the following year. His people, the fierce but compassionate Maasai, were moved by the tragedy, and hurried to show kindness to heartbroken America. 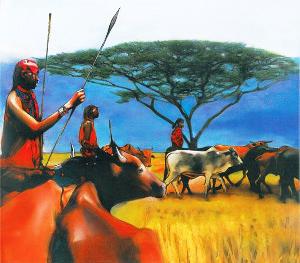 The question was, what could this modest people give to so great and powerful a country as the United States? The answer: Cows! They could offer their sacred cows; cows they loved and worshipped and named. Cows, that to the Maasai, symbolized life itself–

14 Cows is an unforgettable book. Award-winning illustrator Thomas Gonzalez uses earth-colors of brown and red to animate his life-like drawings and make readers feel they have landed right in the middle of Kimeli’s Kenyan village. Each illustration is breathtaking in its own right, from the achingly beautiful African landscapes to the soft close-ups of the shimmering brown eyes of the compassionate Maasai people.

The Maasai and their precious cows may not have made history in the way that Americans define monumental acts, but their kindness will live on for generations because, as Deedy writes in her book, “There is no people so small they cannot offer a mighty comfort.”

This review originally debuted at this link: http://picturebookdepot. com/2011/14-cows-for- america/