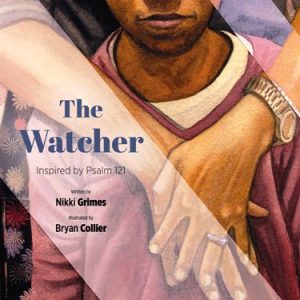 In the book, a wide-eyed pre-teen named Jordan is on the lookout for his nemesis, an unsmiling girl named Tanya. Tanya bullies Jordan unmercifully, growling his name and snatching his lunch and making his life perpetually miserable. In response, Jordan spends most of his days blinking back tears, beating himself up for not knowing how to stand up to Tanya, and talking to the Lord about his troubles.

In the meantime, Tanya has a story of her own. She has been laughed at because she stutters and isolated because she doesn’t fit in, and because she is miserable, she makes sure everyone around her feels the same. But as the story progresses, readers discover that not only does Tanya feels alone and friendless at school, some unknown situation at home has resulted in her being raised by her grandmother. All this young girl wants is a normal life and a chance to make friends with someone who hasn’t heard all the bad things going around about her.

Enter Israel, the new boy in the class who somehow manages to befriend these two natural enemies (Tanya and Jordan) and bring them together is a sweet and healing friendship. 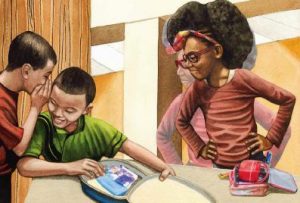 The Watcher is a poignant book about bullies, their victims, and the redeeming power of friendship. Ms. Grimes uses a form of poetry called “Golden Shovel,” originally invented by poet Terrance Hayes where poets take one or more lines from a poem and use each word at the end of the line without changing the order. In this instance, Ms. Grimes took the lines from Psalm 121:1-8 (I lift up my eyes to the hills–where does my help come from?”) and tells the story of Jordan, Tanya and Israel with the words.

Ms. Grimes’ prose is hauntingly beautiful as it spells out the loneliness, despair and hope that often befalls children and teens as they navigate their way through the school system. Ezra Jack Keats and Coretta Scott King Award winner Bryan Collier uses deep, rich, somber colors to paint Tanya’s confusion and isolation and Jordan’s despair. Young readers will connect with the sad eyes, fearful glances, and hopeful smiles that dot the story line.

Use this book in early elementary and middle grade classrooms to open a discussion about bullying, being afraid, home situations that spill over into the classroom, and learning to express feelings and emotions without anger, violence or withdrawing from others.

This book can also serve as an inspiration for aspiring poets who do not want to be bound by rhymes and styles, but who want to tell a story with all the creativity and freedom they can muster.

How to Trick the Tooth Fairy