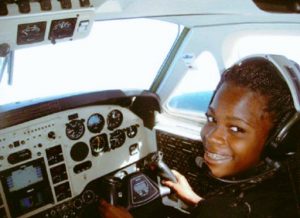 Six years ago in 2010, a then 15-year-old African American girl of Nigerian descent set off on a cross-country adventure in a single-engine Cessna. Her name is Kimberly Anyadike, and her journey inspired young African Americans everywhere that you can do anything you put your mind to.

Kimberly’s journey took her from her hometown of Compton, California all the way to Newport News, Virginia. According to the Los Angeles Times, young Kimberly learned to fly at the tender age of 12 via an after-school program for disadvantaged youth called Tomorrow’s Aeronautical Museum.

The idea to do the solo flight was Kimberly’s own, but she was accompanied by an adult safety pilot and none other than one of the original WWII Tuskegee Airmen, Mr. Levi Thornhill. The flight took Kimberly and her companions thirteen days and over 2,342 miles. 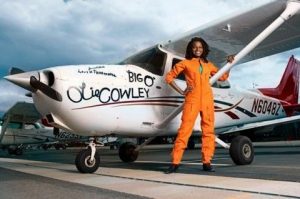 Mr. Thornhill wasn’t the only Tuskegee Airman Kimberly had the opportunity to meet. In all, she got to meet 50 valiant Tuskegee Airmen during her trip, saying that, “They left such a great legacy. I had big shoes to fill.”

For early information about Kimberly’s life, type her name into your favorite search engine. Or click on the following links:

UPDATE: According to the UCLA Newsroom, Kimberly “is majoring in physiological science and minoring in African-American studies and Spanish. She’s also an aspiring cardiovascular surgeon, a registered emergency medical technician, a member of the Flying Samaritans at UCLA, which brings volunteer medical care to Tijuana, Mexico, and a mentor to at-risk youth in South Los Angeles, near where she grew up in Inglewood.”

Read about it here: Exit to UCLA Newsroom

The video in this post originally appeared at this link: https:// youtu.be/I -gvDJ48VRk