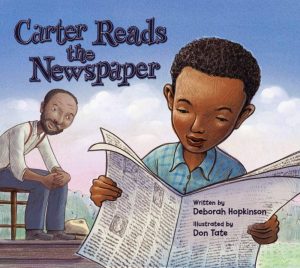 Don’t you just love it when you get to read about an unsung hero? But think what it must be like when that unsung hero has made a name for her-/himself by shining the light on unsung heroes. No, this is not a tongue-twister. It’s a review of a lovely little “sleeper” picture book about Carter G. Woodson, the man who established Black History Month and changed the way people thought about history in the process. The book is called Carter Reads the Newspaper, by Deborah Hopkinson.

The book opens with young Carter growing up on a small farm in Virginia, where he listens to his mother and father tell stories of what it was like during slavery. Carter is fascinated that his parents’ amazing stories are not included in any of the history books. His father ran away from his owner and joined the Union Army during the Civil War, and his mother once asked her owner to sell her so her mother would not have to leave all her other children behind. Carter’s parents were heroes in their own right, and yet no one thought to document their stories.

Carter and his siblings endured extreme hunger and only four-month school years since the children were needed to help with the backbreaking work on the farm. But poor though he was, Carter’s father taught his children to be proud of who they were, and he encouraged Carter to read to him whenever he could get his hands on a newspaper.

Reading taught Carter that the world went beyond the worn-out farm he lived on. But he did not truly learn about the diversity in the world until he became a coal miner. It was then that he became friends with another miner named Oliver Jones, who turned his home into a reading room and invited other miners to visit after work. There, Carter was exposed to books written by African Americans, and newspapers from all over the world. And since Carter could read when most of the other miners couldn’t, he was the one to do the reading. When the other miners had questions, Carter did the research.

Eventually, Carter was able to finish high school (at age 22) and college, and he went on to become a teacher, and to earn a masters degree and a PhD. But one day, one of Carter’s Harvard professors said that black people had no history and Carter knew what he had to do: he had to prove this ignorant man wrong. He began to research and document the lives and achievements of African Americans, and then he spread the word to schools, colleges and churches. He even established Negro History Week, which we know today as Black History Month.

Carter Reads the Newspaper is a lovely, quiet book about how the mindset of the times, the events of the day, and the need for a hero all intersected to inspire an humble young man to change the way the world thinks about history. Because of this man, people knew who the underdogs were — and they cheered for them! The prose is appropriate for ages 5-9, the story line is riveting, and artist Don Tate’s illustrations are warm and lovely.

Use this book to open discussions about unsung heroes in students’ lives, occupations, literacy, and the necessity of continuing to document the history and achievements of African Americans.